The name Mokum is slang for Amsterdam. Well, Yiddisch slang really. But it has become so dutch, it's the most local way to say Amsterdam. And we love this city! It's filthy and sleazy at times, but also open-minded, creative and easy-going. There's always something going on somewhere like any other world-city, but still it feels like a village. So here's our list of favorite spots in Mokum.

Hands down, the best sushi-place in town. Very small indeed, but the owner is always friendly and he remembers my love for UCC coffee. Now the sushi is just perfect and be sure to take the catch of the day. Super-fresh! Every day - but mondays - from 16:00 to 21:30

Next to the Made in Mokum workshop is the Westerpark. Not so well known as the Vondelpark (sort of a Central Park in Amsterdam) but Westerpark is more of a creative place. Located in the west, you can get there by walking (!) from Central Station, along the best shopping street in Amsterdam, the Haarlemmerdijk. Shop shop shop. Westerpark has lots of different areas; there are also plenty of little places and restaurants and bars there. And lots of events: concerts, carnivals, markets and a monthly 'local Market'.

Now don't be fooled; this is not an easy museum. Vrolik sound like frolick or 'vrolijk' (dutch for happy) but it isn't. Vrolik was a big anatomy proffessor in the early 19th century and this collection is hidden - but now open to the public - inside the biggest hospital, the Amsterdam Medical Centre. The collection consists of historical anatomical specimen. Now if you have a healthy relationship with life and death, you'll soon get over the initial eeky freakyness and then be mesmerized by the incredible physical structures that make up the human and animal body. There's definately infinite beauty in biology.

Ofcourse everyone has to see the Rijksmuseum and no trip is complete without seeing the Nightwatch or any other Rembrandt painting here. But please take some time to see the Asian wing. It's smaller than before but there are some surprises. They've put modern art amongst the ancient ceramics and that makes for a great discovery. I'm always intrigued by the Edmund de Waal display that hangs comfortably amongst the asian stuff. Very verrassend.

So I used to get my clay from another 'dealer' in town, but I really love how the owner of Van Ginkel/Gerstaecker helped me with listening to me as a maker. He actually didn't know much about clay so he asked his customers. It might seems logical but as all dealers had the same clay in storage, it wasn't good for anyone. Now they have plenty of clays, glazes etc. Thank you guys for listening!

Now this is a typical dutch kind of Art Deco. It flourished between 1910 and 1930 and it has some interesting influences. If you go around town (preferably on a bike) you can still see a lot of the architecture and the sculptures in the open air. And even the 100's of bridges are designed in this sober decorating style. I'm a big fan of omni-artist and 'city-sculptor' Hildo Krop but also love the work of Jaap Kaas, H.P. Berlage en Joseph Mendes da Costa.

Located a bit outside of Amsterdam, in Haarlem (yes, NY's Harlem is named after it) is just a few miles from Amsterdam and it's the only decent place to buy pro ceramic stuff. So lots of powders and clays and tools and every now and then (twice last year) I'm there to have a kiln fixed. Nice people too. There's an exhibition space upstairs and they have great workshops. To me it's a candyshop with very toxic oxide-candy. Mmmm. Borax!

A zoo is great and makes you feel like a child. Now don't go 'ah, animals in cages' on this one. Just give in and be amazed about natures tendency to evolve and come up with the greatest textures. Can't you just watch animals eat and fuck all day? So at 11:00 it's the vultures and butterflies. And after that the sealions. At 12:30 it's the reptiles and that's just awesome. At around 15:00 the lions and other carnivors get their meat. Amazing. Great sculptures throughout the zoo.

Yep, it doesn't get more dutch than this: kroketten or in a fancy way "croquetten". Basically a 'ragout' deepfried in a crispy breadcrum-crust. Very nice and the best ones are made by Van Dobben. You can eat them at their establishment near the Rembrandtplein. But don't expect service or dutch 'gezelligheid'. It's very, very basic. So you won't find many tourists there. Nor any explanation in english. Just order a 'broodje van Dobben'.

About MADE IN MOKUM 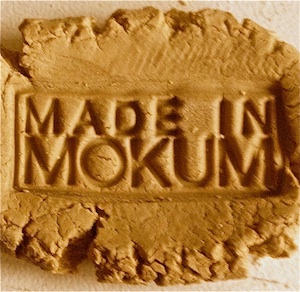 So we're an artisan pottery studio in Amsterdam. We make ceramic things we love and share them with you. We do a lot of vases, bowls and pots. And if you want, just ask us to make one especially for you or your loved ones (dead or alive). Our work is sometimes dark and quirky, even wonky if you like. We don't care too much about traditional perfection.

We try to make usefull and beautiful stuff. If you don't put flowers or brushes or branches in our vases, they can look just beautiful without. They are tough. Don't throw them at people. All our shapes and also our glazes are homebrewn. Made at our home and that's Mokum to us.

Really, what more do you need to know about us? Then drop us a note to share your thoughts, ask your question, put in an order or whatever you want from us.